In the electrical world, the term “double tapped breaker” is used to identify that 2 wires, or more, from multiple circuits are connected to the same terminal screw in the breaker or fuse.  Some term this “double-posted” instead, but the concept is the same.  This is possibly the most common defect observed in the electrical panels, but fortunately, is frequently relatively easy to remedy.  So, what is the problem?  Why does this matter, and why is it done in the first place?

Below are two examples of a double tapped breaker: 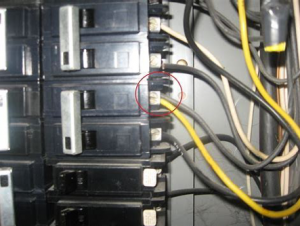 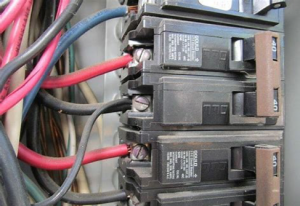 Why is “double-tapping” done in the first place?  Well in many cases you would have to climb into the mind of the homeowner/handyman that did the work.  Most of the time this condition is discovered, there are open breakers in the panel that could be used to separate the wires.  A qualified electrician would not (should not) install circuit protection in this manner.  In most panels, however, the breakers are not permitted by the manufacturer to have more than one wire.   So back to the original point…why?  Probably number one is the lack of knowledge, #2 is carelessness, and #3 there are no more available spots in the panel so the guilty culprit will use the filled breakers to get the connection made.  You typically see this in a home that was built with a 100-amp panel, or smaller, and then the home is renovated, enlarged, or in some way has additional circuits installed.  There simply isn’t enough room and so this installation is the easy way out.

A breaker designed for 2 wires 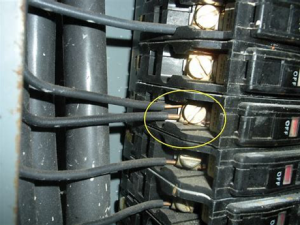 An example of pig tailing a wire to make a correction 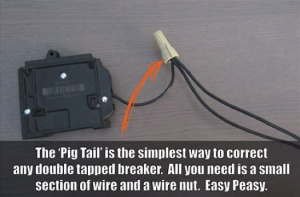 Why does this matter?  This is probably the most important part of the whole concept.  A common myth is that you are overloading the breaker by installing multiple wire on it.   “Double tapping” is kind of a generic term as we have seen “overachievers” improperly installed 3, or even 4 circuits on the same breaker.   While overloading the breaker may happen in this setup, the primary reason it is not permitted is that the breakers are manufactured for the terminal screw to tork down specifically on one wire.  When another wire is added, even if it is the same gauge, the screw may become loose and lead to overheating and arching.  This is considered a potential fire hazard and should be corrected when found.

As mentioned previously, (see photo above) the repair is typically straight forward.  A qualified electrician can pig tail the circuits together and run one wire to the breaker.  Also, when the panel permits, a tandem breaker can be installed to allow for additional circuits.  In some cases, a sub panel can be installed next to the main panel.  This will allow more spaces for circuits to be installed without having to replace the main panel.  In extreme cases, a panel will need to be upgraded to allow for proper installation of more circuits.  Regardless of what is needed, we recommend having the repairs done by a qualified electrician.